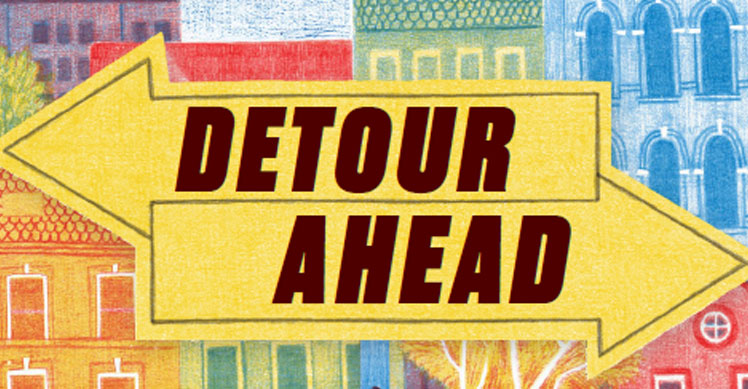 Sarabeth Interviews Authors of Detour Ahead!

National Design Team member Sarabeth got the chance to interview Tracy López and Pamela Ehrenberg, authors of new PJ Our Way selection Detour Ahead. Check out what they had to say!

National Design Team member Sarabeth came up with some great questions for Detour Ahead authors Pamela Ehrenberg and Tracy López. Their answers did not disappoint!

Sarabeth: This book has two authors, which is unusual. Was it hard to write a book with two authors?

Tracy: Great question! I was surprised that it was actually easier in some ways to write with a co-author! I often get distracted so it takes me a long time to finish projects I work on by myself, but having a co-author to be accountable to helps me stay on task. Knowing someone else is depending on me motivates me to do my best. Also, writing with someone can sometimes be like when musicians have a jam session and riff off each other. You never know what new music you'll create together that you never would have created on your own, and that's really fun.

The most challenging part of having a co-author is probably just keeping the timeline straight and keeping things consistent. Sometimes we literally had to get on the same page, and we worked a lot initially through Google Docs before passing a Word doc back and forth.

Pamela: ​​I agree–I found it much easier than I expected—probably because of the awesomeness of Tracy’s organizational skills and the different ways that we balanced each other out so well. I’ve never had the experience of having someone else care as deeply as I did about a work in progress that we didn’t even know if it would ever be published—it was incredible to have a partner in all the ups and downs of getting this book out into the world!

Sarabeth: What inspired you to make this book?

Pamela: So, one day in 2015, my son and I were on the H4 Metrobus on our way to his school and my “daytime” work when our teenage neighbor across the aisle yelled, “Someone fell off a bike!”—and didn’t stop yelling until the driver stopped to make sure the cyclist was OK. It turned out that the bus had passed a bit too close to the cyclist (who was an adult) and caused her to fall off her bike. I realized that no one else on that side of the bus had either noticed or commented on the incident—and I was so glad that our neighbor had been sitting where he was and was willing to get the attention of whoever could help. It was a brief incident that I wished more people could know about.

Sarabeth: Are the characters based on real people?

Tracy: The characters are fictional, but my husband and I have two grown sons together and a lot of the inspiration for Guillermo comes from having raised them. Guillermo's family is what I wish my boys had been able to see on the pages of books when they were growing up because they're a lot like our family with Guillermo's father being from El Salvador and his mother being white and not Latina. When they were little I wasn't able to find households like ours in the stories I read to them. Thankfully there are more stories about bilingual, bicultural families to choose from these days, and I hope that continues.

Sarabeth: What do you think you have in common with Gilah and Guillermo?

Tracy: Like Guillermo, I used to write poems in the margins of my algebra exams. Back then I didn't think I needed math, especially algebra, but as a grown up I'm surprised that I actually do use it. Sometimes I even like it a little—though not as much as poetry! … And like Gilah, I'm a middle child who loved art class.

Pamela: Ooh, great question. I think there’s a lot about Guillermo that will resonate with all writers: a compulsion to write when we “should” be doing other things, a nervousness about putting our words out there especially in front of people we actually know. That was true for me when I was Guillermo’s age and is still true now! And one accomplishment that I’m proud of from this pandemic era is re-learning how to ride a bike! Not as skillfully as Guillermo yet, but still—until now I hadn’t thought to wonder whether Guillermo played any part in that!

In terms of what I have in common with Gilah—I think more than any other character I’ve written, the process of getting to know Gilah better was also a process of getting to know myself better. My research for the book made me reflect back on some things from my own childhood and sent me down a path of learning more about my own brain wiring. A psychologist was able to determine that I’m not autistic (it took him a bit more testing than usual to be able to tell for sure) but that I might instead have a condition called Nonverbal Learning Disorder–where visual cues can be tricky unless they are translated into words. That made a lot of sense why I felt so “at home” writing out the social rules Gilah pieced together for different situations.

Sarabeth: How are you different from Gilah and Guillermo?

Tracy: I haven't owned a bicycle for a long time because we don't have the space to keep one so I don't ride around like Guillermo these days. And I definitely can't break-dance like Gilah!

Pamela: Some ways that I’m different from both characters—I’m an only child, though I always wished for siblings, for both the loving and more challenging interactions that Gilah experiences with Asher and Miri and like Guillermo experiences with Araceli. I wish my Spanish were anywhere near the level of Guillermo’s. And I am still striving to be more like Gilah in her willingness to call out and do something about emergencies. I get inspiration on that as well from my kids and their friends, who remind me every day about the current climate emergency—if any PJOW readers have ideas on coming together as a community to address this, please definitely feel free to reach out via my website!

Sarabeth: How did the two authors meet?

Tracy: Pamela and I met online in a group for writers of children's fiction. Although the spark that began our journey together wasn't as dramatic as Gilah and Guillermo's, there was definitely something about it that felt meant-to-be from the very beginning, like the stars had aligned. I'm so thankful the internet exists and made our friendship and this book possible.

Pamela: I’m so thankful too! And kind of amazed that we worked together over email for—was it 2 years? Do you remember, Tracy?—before meeting for pizza.

Pamela: Wow! I am in awe, as always, at your ability to organize all those emails! Of course, after that lunch (still the only time we’ve met in person!), we went back to working on the manuscript by email and Google Docs for another *4 years!!!* before signing the contract with PJ Publishing! Thank you so much, PJ Our Way, for such a happy ending to this story!

Pamela: This was really fun–thank you so much, Sarabeth, for the terrific questions, and to PJ Our Way for the chance to be here!

Tracy: Thank you from me too, and happy reading!

Sarabeth is a member of the PJ Our Way National Design Team. Her hobbies include drawing, crafts, and baking. She is 12 years old and lives in New York.

Pamela Ehrenberg is the author of the young readers’ novels Ethan, Suspended and Tillmon County Fire as well as two PJ Library titles (Queen of the Hanukkah Dosas and Planting Parsley). A five-time recipient of support from the DC Commission for the Arts and Humanities, she works at the National Association for the Education of Young Children and lives with her daughter and son near the National Zoo in Washington, DC.

Tracy López is a novelist and poet born and raised in Maryland just outside Washington, DC. When she isn't writing, she loves to read, create art, and bake pan dulce. She now lives in the beautiful mountain state of West Virginia with her husband, sons, and a silly hound dog. Detour Ahead, co-authored with Pamela Ehrenberg, is her first children's book.