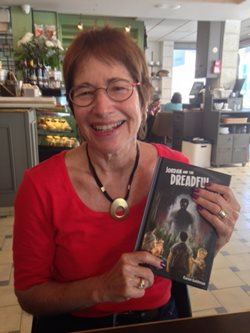 Have you ever thought about how authors get their book ideas?

What inspired you to write this book?
I began writing Jordan and the Dreadful Golem about five years ago. At that time, once a week I would take my two oldest grandsons, Yarden, (he's called Jordan in the story) and Ziv out for lunch. On one of our lunch dates, Yarden and Ziv hurt my feelings. I decided that instead of wagging my finger at them and making them feel bad I would write about it in a story. They could read the story and understand what they had done. Well, the more I got into the story the bigger it became. I just kept writing and writing. Recently I told someone this. She asked me, “What did the boys do?” I just threw up my hands, because I can't remember.

Did you enjoy writing this book?
I enjoyed writing the story because I enjoy living in Israel and I wanted to create a story that would interest people about Israel. I also had the pleasure of using five of my grandchildren as the main characters. The story actually kind of wrote itself. I would sit down at the computer and begin to write and a lot of the time it was like the characters were telling me what to write. I've spoken to other authors who have had this experience. It's almost like the book writes itself.

Have you loved fantasy yourself?
I wasn't really into fantasy when I began writing the book. However I have become a real fantasy book reader now and I enjoy it a lot. Most of the fantasy books are very well written and have wonderful plots.

Will there be a sequel?
I have now finished the sequel to Jordan and the Dreadful Golem. The new book is Jordan and the Clone Conspiracy. I hope it will be available sometime in December of this year.

Have a question for Karen or Sydney? Which author would you pick to interview?

Hi, I didnt read that book but I think there is most likely to be a sequel. Books are awesome and on books that I really like I always wish for a sequel but there usually are sequels.📖