Thinking about "Jordan and the Dreadful Golem"

I think that if I was given the chance to create a person (kind of like a mini me), I think that I would - but I would make them average. Completely average. 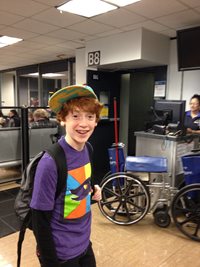 Ryan here, and after reading “Jordan and the Dreadful Golem,” it really got me thinking about golems and creating people. I think that if I could be given the chance to create a person (kind of like a mini me) I think that I would but I would make them average. Completely average. Normal face, eyes, ears, but still capable of learning. I think that if the technology can be invented, everyone should have access to ONE mini me. One for anyone who would like. I think that if people had multiples than things could get out of hand.

Another thing that this book got me thinking about is how cool would it be to have some kind of super power??!! I mean if you could have one power related to nature (like Jordan and his friends) what would it be? Would it be something like Noam who can control the clouds? Ellah, who can spin webs? Maybe Eden, who can create awesome new creatures, with her mind? Personally, I think that I would like to have a tail. I don’t know if that counts, so if it doesn’t I think that I would LOVE to be like a chameleon and blend in with my surroundings.

That’s All for Now, I’ll see you guys next time!

P.S. If Lavan scared you half as much as he did me, then here is a handy trick I used: Pretend that you are Jordan or one of his friends with the power to defeat him! Who knows? It might just be true.

My power would be to have the power of everything

If I could have a power I would choose, invisibility.